Being the pretty fab and stupidly unobtainable Richard X “re-production” of Saint Etienne‘s debut album Foxbase Alpha. Some interesting reinterpretations and a few that actually surpass the originals. In particular, this version of “London Belongs To Me” is definitive and a candidate for any future Saint Etienne “best of”.

By the way, there is a reason why I’m sharing this on Boxing Day particularly, which you’ll either get immediately or be pondering over for ages…

Over the top with P. J. Proby and friends

Here’s another single that was released for the christmas market, but isn’t actually very christmassy at all.  From 1996, P. J. Proby teams up with Marc Almond (who also co-produces with regular collaborator Neal Whitmore) and the musicians from orchestral pop outfit My Life Story for a cover of the 1967 Little Anthony And The Imperials US hit “Yesterday Has Gone”, and it’s as insanely overblown as you would expect from that line-up.

The B-sides are both new songs written specially for Proby: Almond and Whitmore contribute “Devil In Red Velvet”, while “Pain in Your Heart” is written and produced by Bob Stanley and Pete Wiggs of Saint Etienne.

I think it’s safe to say that the lounge revival was one of the lesser musical trends of the mid 1990s, but while it lasted, Sub Pop-signed Rhode Island quintet Combustible Edison were probably its coolest hepcats. According to Wikipedia, “unlike other bands with a more ironic take on the lounge scene, Combustible Edison took the music seriously and strove to add to what its members saw as a canon of works such as those by Esquivel, Henry Mancini, and Martin Denny”. If they were ever trying to be funny, it was funny peculiar, not funny ha ha.

The group had its roots in the band Christmas, founded in 1986 by Michael Cudahy (vocals / guitar) and Liz Cox (vocals / drums). At various points the band also included keyboard player Peter Dixon and Michael’s brother, bassist Nick Cudahy. I’m not very familiar with the earlier group, but I like what little I have heard – very art-school new wave stuff. In 1991 Michael Cudahy wrote a stage show for which he assembled a 14-piece lounge band, The Combustible Edison Heliotropic Oriental Mambo and Foxtrot Orchestra, which included Liz, Nick, Peter, and percussionist Aaron Oppenheimer, and out of that came the five-piece Combustible Edison, who released a debut single in 1993 (the same year the last Christmas album, Vortex, came out) and kept going from there, issuing the albums I, Swinger (1994), Schizophonic! (1996) and – with some line-up changes – The Impossible World (1998), before officially announcing their split in 2001. Although it includes a couple of recycled I, Swinger tracks and a couple of pieces by other artists, the Four Rooms soundtrack (1995) is effectively an unofficial Combustible Edison album too, and by all accounts was much better received than the movie itself.

I always liked the idea of Combustible Edison more than I liked the actual records. At the time I was into other bands with 60s lounge and exotica influences, like Stereolab and The High Llamas (Mars Audiac Quintet, Gideon Gaye and I, Swinger all came out about the same time), so Combustible Edison would have seemed a natural inclusion in my record collection, but although I bought the albums, they never got played much. Eventually the CDs got put in a drawer and stayed there. The drawer moved house with me; the CDs were undisturbed. I have played them since, but they didn’t really grab me… except for this one. 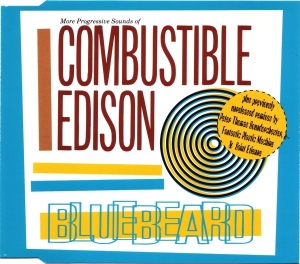 In 1996, two German-only singles were issued to promote Combustible Edison’s second album Schizophonic!. I don’t know whether that indicates that Combustible Edison were particularly popular in Germany, or just that someone thought that with the right push, they could be. Given that there were no singles from their next album, I’m guessing the latter. Anyhow, alongside the original LP version, the “Bluebeard” single featured an international line-up of remixers: German exotica composer Peter Thomas, Britain’s Saint Etienne, and Fantastic Plastic Machine from Japan. It’s the last of these who provides my preferred interpretation, ramping up the 60s vibe and making it sound like the theme for an imaginary ITC adventure series.

For completeness, here are the other four tracks from the single. The last one isn’t actually mentioned anywhere on the CD or packaging, but the mix title is given on the corresponding 12″ issue.

And a little something to drink? Here’s the recipe for the Combustible Edison cocktail, as given on the back of their first album, I, Swinger:

In a shaker full of cracked ice, combine Campari and lemon juice. Shake and strain into a chilled cocktail glass. Heat brandy in a chafing dish. When warm, ignite the brandy and pour in a flaming stream into the cocktail glass. If the brandy is chilled and shaken rather than ignited, the drink is known as “The Edisonian”.

I promised you a World Of Twist post and here it is… except that I’m actually going to start with a bit of Saint Etienne. Always welcome, obviously, but the significance here is that it’s remixed by World Of Twist’s Gordon King. Issued as one of four remixes on a 12″ and CD single in 1992, it also appears on the 1996 compilation Casino Classics.

I owned the “Avenue” remixes long before I got into World Of Twist, and when I did start to discover their catalogue, I was struck by one of the B-sides to the “Sweets” single. It’s an instrumental version of the Quality Street album track “This Too Shall Pass Away”, overlaid with clips from a BBC documentary about pioneering record producer Joe Meek (which of course you can now find on YouTube), and it certainly sounds to me like a forerunner to the “Avenue” remix. Richard Evans is credited as mix engineer, but I assume that’s a technical role and it was King who was calling the shots.

Link: World Of Twist – This Too Shall Pass Away (Chat)

As you might guess, “This Too Shall Pass Away” was not a World Of Twist original. It was written in 1964 by two men then working as junior BBC producers, Ken Howard and Alan Blaikley, who are normally credited as the single entity Howard Blaikley, or even as “H. Blaikley”, which is how they’re listed on the Sweets CD. They would go on to mastermind the success of Dave Dee, Dozy, Beaky, Mick and Tich, before moving into musicals and TV soundtracks, but as 1964 dawned, they were unknowns looking for a break.

As were The Sheratons, a London band fronted by singer Dennis D’Ell and including drummer Ann “Honey” Lantree. That’s her being interviewed at 2:56 in the track above. When Howard Blaikley saw them play in Islington in February 1964, the group’s set was mainly covers, and after the gig, the tunesmiths approached the group to offer their services. Their luck was in: the Sheratons had an imminent audition for Joe Meek, and were keen to find some strong original material. The duo’s songs fitted the bill, to the extent that when the group performed “Have I The Right?” at the audition, Meek insisted on recording it there and then. The recording was eventually placed with Pye Records, who renamed the group The Honeycombs. With promotion leaning heavily on the supposed “gimmick” of a female drummer, “Have I The Right?” went to number one, Meek’s third and last chart-topper.

The single was followed in short order by a self-titled album, mostly of Howard Blaikley compositions, and again produced by Meek. “This Too Shall Pass Away” was the closing song, and I reckon it holds up pretty well, in a sort of Righteous Brothers / Walker Brothers style. (Not that anyone was making comparisons to the Walker Brothers at the time, since they didn’t debut until the following year.) World Of Twist’s version is alright, but it suffers from some cheesy touches. Kudos to them for picking out the song in the first place, but it really didn’t need those woodblocks.

“This Too Shall Pass Away” was the only non-original on Quality Street proper, but the CD added two bonus cover versions, both previously released as B-sides. The first was of a relatively well-known Rolling Stones album track, “She’s A Rainbow”, the original of which was one of the better regarded numbers on the Stones’ uncharacteristic and somewhat divisive psychedelia-inspired 1967 LP Their Satanic Majesties Request. (It fades into the next track on the LP, but the unfaded version is available on Forty Licks and elsewhere, and is featured here.)  World Of Twist do a decent job of it (helped by the legendary Martin Hannett, in one of his last productions)  though they do lack a bit of the lightness of touch present in the Stones’ version.

The other was a Sylvester Stewart composition which first appeared in 1969 as “Life and Death in G & A”, a minor US hit for New York rock group Abaco Dream – though to this day, debate rages over whether they actually played on their own record, or whether the true performers were Sly & the Family Stone. World Of Twist’s version of the song was based on a 1974 recording by soul group Chairmen Of The Board, on which the vocal quintet were backed by a session group made up mostly of ex-members of Funkadelic, who seem to have been given free rein to do their thing… or their thang… whichever seemed most appropriate at the time. This version dropped the “in G & A”, and greatly expanded the piece with new instrumental sections composed by two members of the backing group, Donald Baldwin and Billy Nelson.  Although World Of Twist reduced the title to just “Life And Death”, they actually cover the entire suite (and give Baldwin and Nelson due credit). Their version seems a bit too polite to me, but see what you think.

Posted in: Chairmen Of The Board, Honeycombs (The), Rolling Stones (The), Saint Etienne, World Of Twist