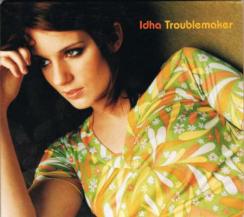 When I posted country-folky-bluesy-acousticy-person Idha‘s debut single a few days ago, I had a request in the comments from Mark (hi!) for her 1997 second album Troublemaker. So here it is.

There was a bit of a change in emphasis for this one, going “slick” rather than “homespun”. Where Melody Inn came across as a homage to California filtered through the perspective of a Swede living in the UK, Troublemaker drops the filter and, to me, is less interesting as a result.

Creation were obviously splashing the cash a bit (though not on a company-endangering My Bloody Valentine scale, obviously) and it sounds a bit over-produced compared to her debut, but it has its moments, particularly the brass-assisted single “Going Down South”.

Tracklisting:
Sorry Sorry
Always Been With You
Going Down South
Still Alive
Mercy Me
Sweet September Rain
Me And Johnny
Troublemaker
Fields Of Avalon
Just Moved In