Nothing more, nothing less 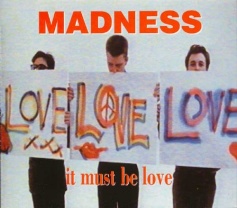 Grabbing a CD at random from the drawer, I am pleasantly surprised to find myself holding a copy of the 1992 reissue of “It Must Be Love” by Madness.

I don’t need to tell you much about the lead track, considering it’s one of their best-known singles, but in brief: non-album single released for christmas 1981; a cover of Labi Siffre‘s equally charming 1971 original; made #4 in the UK and snuck into the US top 40 on the coat-tails of “Our House”.

On this issue it’s supported by three excellent B-sides: “Bed And Breakfast Man”, the single-that-never-was from the One Step Beyond album; “Never Ask Twice” from the “Shut Up” 12″ single, here re-titled “Airplane”; and “Don’t Quote Me On That” from the “Nightboat To Cairo”-led Work Rest and Play EP, wherein Chas Smash responds to the idiot journos who accused the group of being supporters of the National Front, while the band get into the ska-funk groove thang behind him. I think the last two songs might have been making their CD debut.