I was wondering whether I could come up with a better pro-suicide policy than the lockdown. But really, there’s no need. You don’t support a policy of social distancing and telling people not to leave their homes unless you positively want to drive people to suicide. And apparently 91% of people do. Unless this somehow magically unhappens, the fact that this can and has happened is forever incompatible with opposition to suicide.

So good news, lockdown fans. You and your fascist friends win! Enjoy your future life in your Nazi wonderland.

So… I had hypnotherapy the other day. Which is just about the most interesting thing I’ve done in years, but I’m not going to say too much about it at this stage because I’ve only had one session so far.  It was a good experience and seems to have had some effect, but I’m having another couple of sessions so maybe I’ll tell you more about it at a later date.  Meanwhile here’s Orbital, sampling a hypnotist way back in 1990.

To go with my Slapp Happy Imaginary Compilation Album now up at The New Vinyl Villain blog, here are (most of) the cover versions I mentioned in that write-up, plus the original version of “War” so you know what The Fall are covering. Sorry I haven’t included the Ruth’s Refrigerator track in this lot; I thought I’d ripped it but I hadn’t… I’ll endeavour to add it later.  Knowing me, that’ll probably be in 2023 or so. [EDIT: In fact, I don’t think I have the Ruth’s Refrigerator track to share. I did, once upon a time…]

Links to all my previous contributions to the Imaginary Compilation Albums series can be found on the Elsewhere tab at the top of the page.

Sorry I haven’t posted in a while, and I will get around to doing a load more posts at some point, probably. But just to assure (or dismay) you that I’m still alive, here’s a single I’ve had in the queue for a while and never got around to sharing.

They’ve got a bit more praise since they’ve split up, but I always thought Gene were one of the more underrated bands associated with the Britpop scene. They always got dismissed as Smiths copyists, which seemed a bit unfair. So sometimes they sounded a bit like The Smiths – is that a bad thing? Anyway, this is the title track from their debut album, but re-recorded for the single release. I think they just about get away with the repetition of the chorus, but even if you find it a bit grating, the B-sides are pretty fabulous too. I had the cassette single at the time and played it way too much, probably – actually, I probably still have it somewhere! “Don’t Let Me Down” is a Beatles cover, and the one song that wasn’t on the cassette. It’s… less essential than the other tracks. 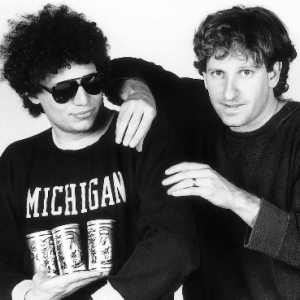 Detroit’s leading pop funk surrealists Was (Not Was) initially came to prominence through their association with New York “mutant disco” label ZE Records, and rather like ZE’s other big stars Kid Creole and the Coconuts, while they’ve always been critical darlings, their invention and satirical edge has often led the wider public to perceive them as the wrong kind of novelty. But that’s the general public for you.

1980 debut single “Wheel Me Out” actually pre-dates their association with ZE, coming out on Island Records’ Antilles imprint, but it definitely sets the trend for their future career, setting down a solid disco-funk groove with weird spoken lyrics on top, and a typically eclectic mix of guest performers, from David Was‘s mum Elizabeth Weiss on vocals to top session guitarist Bruce Nazarian and veteran jazz trumpter Marcus Belgrave.

And of course you get the B side as well. Though personally I prefer the very different “short version” of “Hello Operator” that came out years later on the “Listen Like Thieves” CD single… that’s right, they covered an INXS song, but that’s for another time, maybe.

Orange and Red from the Emerald Isle

Can’t say I fancy 2019 very much, but while we’re going through the motions, here’s some Irish lads with guitars.

Described by lead singer Joe Rooney as “a New order type band that ended up going rockabilly”, Dublin quintet Guernica released three singles in 1987-8, all of them rather scarce and sought-after now. This, their debut, is on Discogs at £135.17. It’s a good record, but is it 135 pounds and seventeen pence good? Is anything?

Anyway, very New Order-ish guitars, and at times threatens to break into “Inbetween Days” by the Cure. And you can have it for free! And can you spot the error on the sleeve (right)?

1. Orange And Red
2. Queen Of Our County
3. Missionary

From 1980’s Super Trouper, by which time ABBA were getting into the bleak stuff, comes this magnificently pessimistic new year song. Oddly enough, although there’s plenty of writing out there about all the dark stuff that found its way into Abba songs, this particular track always seems to get overlooked. Sod “Auld Lang Syne”, these people know that birth is a curse and existence is a prison, and every new year is just the prelude to another twelve months of disappointment and misery.

Sometimes I see
How the brave new world arrives
And I see how it thrives
In the ashes of our lives
Oh yes, man is a fool…

And then there’s the desperate emptiness of the chorus, an ode not to optimism but to denial as a coping mechanism…

May we all have our hopes, our will to try
If we don’t we might as well lay down and die

This is why ABBA were effing brilliant. I mean, I fully expect the “reunion” songs to be a you-can’t-go-back disaster of Carry On Columbus proportions, and I have no interest in going to see Mamma Mia! Here We Go Again!, though I did quite like the first film, but sometimes they just totally got it…

Bring on the bagpipes

I suppose you could call Cicero a one hit wonder; while he did make a few other pretty good pop singles, none had the impact that this one did (his only top 40 hit, it climbed to #19 just in time for Valentine’s Day, which is damn good timing). Though US-born, David Cicero (for it is he) was raised in Livingston in Scotland’s central belt, so his Scottish accent – one of the most striking things about this record – is genuine. The other striking elements are of course the bagpipes (again, the real thing) and the whole Pet Shop Boys production, complete with unmistakable Neil Tennant backing vocals.

For me, the extended mix is the winner here.

A marvellous cassette-only compilation from 1991, released by a small Swedish label, Records From The Cookie Nose Tower. From the title, it would appear that the concept is that it contains Swedish and British acts, though the scattering of Japanese bands (Bridge, Roof, Venus Peter and Marble Hammock) rather undermines that premise.

Regardless, it’s another sparkling selection of early 90s indiepop, with early and rare stuff from then-or-future Sarah luminaries Blueboy (on what may have been their recorded debut?), Brighter and The Orchids (is this really the first time The Orchids have appeared on this blog? Now there’s an oversight), what in retrospect looks like a jarringly big-name contribution from Stereolab, inevitable appearances by Louis Philippe and Momus, and who is that hiding behind the pseudonym Cerise? It’s only Amelia Fletcher, doing a solo version of Heavenly‘s debut single from the previous year!

Oh, and the Swedish and Japanese bands aren’t bad either. Incidentally, Are You Mr. Riley and The Rileys are the same band, they just changed their name… in the middle of this compilation album, it would appear.

Still on a ragga tip

Not a guilty pleasure, just a pleasure. So many of my best musical memories from the early 90s are in the realm of “faceless dance music”, and I think this has to be one of the most likeable choons (not necessarily tunes, but choons) of the era. The biggest hit by Matthew Nelson and John Fernandez, alias Slipmatt and Lime, alias SL2, it leans heavily on a scatted vocal refrain sampled from Jah Screechy‘s 1986 dancehall track “Walk And Skank”.

One a great number of ace floorfillers released by XL Recordings back in the day. And to think that these days people just know XL for Adele…